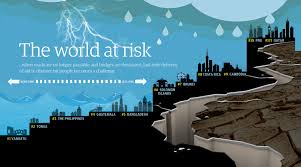 COVID-19 caught the world unwares. The Global Risk Report of 2020 did not anticipate coronavirus as a world health risk. It regrets that progress against pandemics is underpinned by vaccine hesitacy

MASERU: The Global Risks Report 2020, released in January 2020 does underline health challenges to suppress the world in 2020, but it does not directly refer to COVID-19. The top five (5) risks in terms of likelihood outlined for 2020 are extreme weather conditions, failure of climate action, natural disasters, biodiversity losses and human-induced environmental disasters. As regards impact, the Report retains three of the above risks, but adds weapons of mass destruction and water crisis on the list. The Global Risks Report 2020 does not mention COVID-19. Thizkingdom.com analyses global events and actions, which put planet Earth on the brink.

The last two decades have seen drastic events and occurrences that have shocked the world, this indicating that world leaders are prone to be taken by surprise by events that have a devasting effect on planet Earth. At the end of the 20th century (1999), leading to the dawn of the 21st century, there was wide talk of Y2K. Y2K was a theory coined as a precaution for 2000 that a widespread computer programming shortcut would be expected to cause extensive havoc as the year changed from 1999 to 2000. Instead of allowing four digits for the year, many computer programs only allowed two digits (e.g., 99 instead of 1999). As a result, there was immense panic that computers would be unable to operate when the date descended from "99" to "00". However, that was just a fear that did not happen.
The turn of the 2000 saw a regime change in the United States of America, with Republicans fielding George Walker Bush as their Presidential candidate against Albert Arnold Gore (better known as Al Gore) of the Democrats. Bush won the contentious elections. Three years later, the world woke to the Bush-led administration launching an attack on Iraq's Saddam Hussein for weaponry of mass destruction. Indeed, Bush, assisted by Britain's Prime Minister, Tony Blair, led the war against Irag, which had devastating effects on world peace and stability. It was later proved that an allegation of weapons of mass destruction against Irag was only a smokescreen. Opinion polls showed that people of nearly all countries opposed a war without UN mandate and that the view of the United States as a danger to world peace had significantly increased. According to a myriad of reports post the war, the UN Secretary-General Kofi Annan was quoted as saying that the war was illegal, arguing that it was not in conformity with the Security Council. There followed accusations of faulty evidence and alleged shifting rationales became the focal point for critics of the war, who charge that the Bush Administration purposely fabricated evidence to justify an invasion that it had long planned to launch.
The end of 2004 saw recorded massive unemployment, caused by the expiry of the Multi-fibre Agreement of the World Trade Organisations (WTO. The expiry of the MFA) allowed giant garment and clothing producers like China to see opportunities in the previously closed garment market in the USA and left underdeveloped markets such as Lesotho. Lesotho experienced one of the highest unemployment rates in the textiles sector. Eight (8) Asian textile companies closed shop in Lesotho and moved to the USA and other regions. 12, 000-15, 000 jobs were lost. Lesotho had not anticipated this.
The 2005 was the global call for the cancellation of multination debt by the donor community for the poor and highly indebted countries. Therefore, third world countries launched a campaign called the Highly Indebted and Poor Countries (HIPC Initiative). Lesotho was not afforded this opportunity as it was said to be poor, but not highly indebted as it was doing well to service its debt with the International Monetary Fund (IMF) and the World Bank. However, Lesotho cried foul for being left in the cold.
Three years later, 2008 saw the world taken aback by the Global Financial Meltdown, which sent shockwaves across the globe. It started in the USA and its impact was felt by the whole world. The difference between the Global Financial Crisis and the COVID-19 is that the former hit weak economies as they had poor and weak economic stimulus response packages to mitigate the meltdown, while rich countries developed enough economic buffers to withstand the shock of the meltdown. This time around, it is the richest and wealthier economies that are hard hit by the COVID-19. They seem to be in a panic mode as they are even seeking support from underdeveloped countries like Madagascar.
Climate change cannot be left out in the picture of global hardships that have had a devastating effect on world economies. Climate change is said to be human-induced and it manifested itself in the form of tsunamis which hit the Asian and Middle East. The powerful undersea earthquake caused the ocean floor to suddenly rise by as much as 40 meters, triggering a massive tsunami. Within 20 minutes of the earthquake, the first of several 100-foot waves hit the shoreline of Banda Aceh, killing more than 100,000 people and pounding the city into rubble. Then, in succession, tsunami waves rolled over coastlines in Thailand, India, and Sri Lanka, killing tens of thousands more. In all, nearly 230,000 people were killed, making it one of the deadliest disasters in modern history. Other countries like the USA experienced dangerous hurricanes such as Hurricane Katrina, one of the deadliest hurricanes ever to hit the USA. An estimated 1,833 people died in the hurricane and the flooding that followed in late August 2005, and millions of others were left homeless along the Gulf Coast and in New Orleans. It hit states such as Bahamas; Louisiana; Mississippi. Other Sandy, with a death toll of 186 and an economic loss of $65 Billion, Hurricane David, which claimed 2,000lives and had an economic loss of $1.54 billion, Hurricane Jeanne that had a death toll of about 3,000 people and an economic loss estimated at $8 billion. There was Hurricane Flora, that claimed 7,000 lives with an economic loss: $125 million, Hurricane Katrina with a death toll of 1,800, Hurricane Maria, which claimed 4,500. There were other natural disasters around the world, some of which were felt in Mozambique in the early 21st century such as cyclones and dangerous

The Global Risk Report 2000 underscores the fact that health systems around the world are at a risk of becoming unfit for purpose. The Report regrets that progress against pandemics is being underpinned by vaccine hesitancy and drug resistance, making it increasingly difficult to land the final blow against some humanity's biggest killers. It states: "As existing health risks resurge and new ones emerge, humanity's past successes in overcoming health challenges are no guarantee of future results." COVID-19 came more of a surprise to the world, as it was not fathomed at least six months before it struck.

The world was ill-prepared for COVID-19

COVID-19 shocked the world in that as late as early December, the world had rested on its laurels. This is the reason the pandemic struck in the manner it did. It found the world resting on its laurels and focused elsewhere. But many questions abound. One that springs to mind is: did China share with the world or ring early warning bells at the first instance of the Virus? Did China, as required by the International Health Systems of the World Health Organisation, warn the world about a potential outbreak? Or could it be taken that China was too, shocked like everyone else? Did the WHO only learn about the virus when it stuck? How has been the behaviour and conduct of the WHO at the start of the virus, during the lockdowns and how is it managing the global crisis? How is the world responding to the pandemic's devastating effects? What lessons has COVID-19 bequeathed on us? Has it exposed the global governance weaknesses? Does it give hope to people of the world about the future on planet Earth?