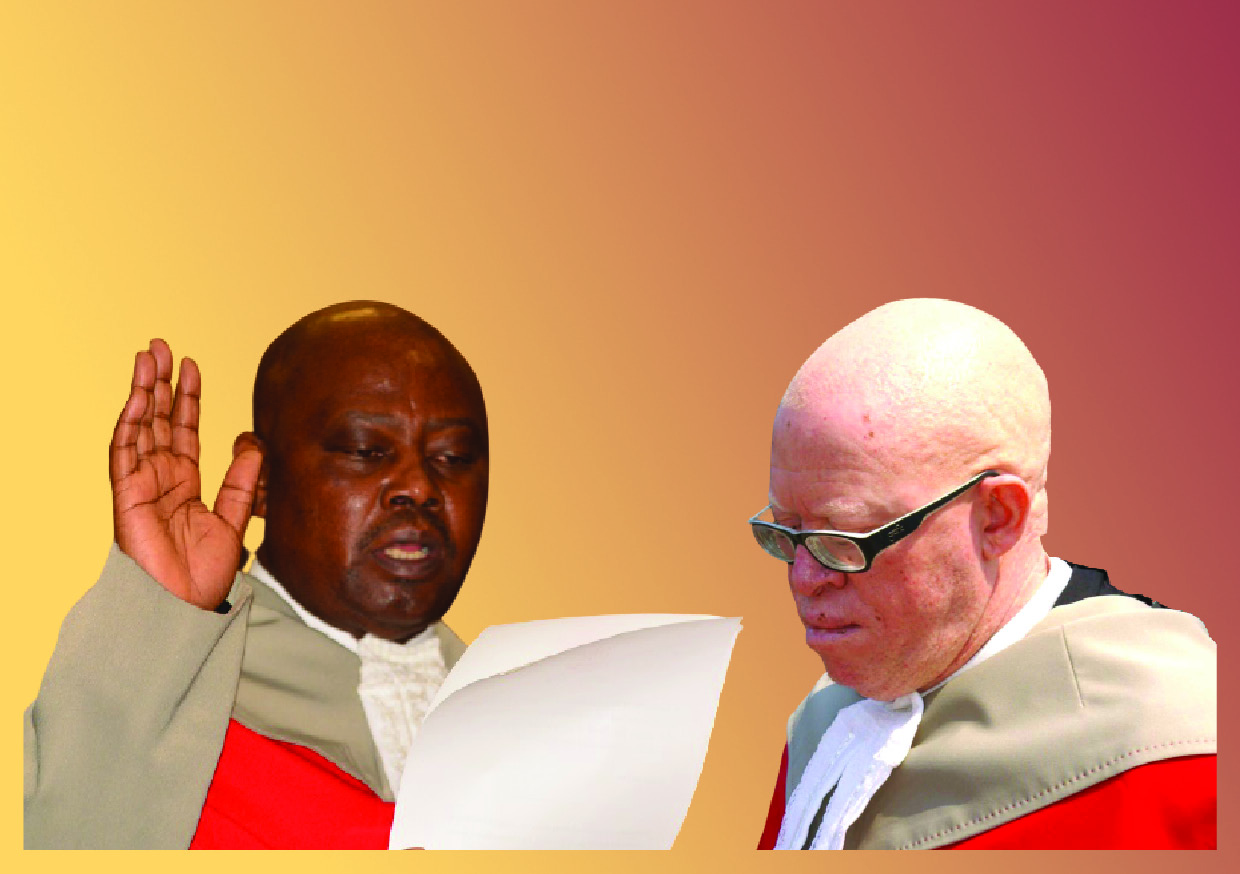 The public perception about the lack of independence of courts of law, backlog of cases and corruption bedevilling the justice system are among the items on the table of Justices Sakoane and Mosito

By Mzimkhulu Sithetho
Maseru - Lesotho's judicial sector has been battered by many factors, top among them being absence of judicial independence, self-imposed infiltration by partisan politics, corruption and a perennial backlog of cases. The chilling effect of these maladies has been delayed administration and delivery of justice to the people. Effective justice administration delivered by the courts of law is one of the most important ingredients of good governance, and by implication, a functioning democracy. Thizkingdom.com takes a snapshot of the performance of the judiciary in the recent past and analyse push factors as well as how the two senior judicial officers may bring about change to shape the character of the judiciary of Lesotho.

Independence and autonomy of the judiciary

Political scholars and pundits often argue about the principle of separation of powers on how preeminent it is in bringing about stability between three organs of state - the legislature, judiciary and the executive branch. However, whatever separation of powers means, it fundamentally portends the functioning of the three arm of state - the legislature, judiciary and the executive branch to operate synergistically and interdependently, but meticulously observing the territory of one another. It portends that no other organ crosses the line to step into the functional territory of the other. But unless there are constitutionally and legally set out guidelines on the parameters between the three arms of state, there is often appetite from other organs to overstep the mark and intrude into others' territories. The executive branch is often a culprit in circumventing this democratic norm. Immersion with the false notion that the executive remains the appointing body leads the it to arrogate unto itself, the unfettered power of wanting to dictate how the judiciary should work and pass verdicts, especially those where the executive is concerned. Also immersed with the notion that it is the one that allocates financial and other resources to the judiciary, the exeucti8ve sees itself as being rightly positioned to interfere in the affairs of the judiciary as it desires.

An effective, efficient, just and transparent administration of justice to any nation hinges on the independence and autonomy of the judicial sector. It is a function of insulation of the justice sector from undue interference by the executive branch or even by parliament. The former often has appetite to poke its nose. In most cases, the insulation of the judicial sector from undue interference by the executive branch is a function of the character of the senior judicial officers leading both the Court of Appeal and the High Court. In other countries, the Chief Justice is the head of the judiciary. While sound argument has been that politicians' power and might transcend the logic of natural independence and autonomy of the judiciary, it has been seen that lack of independence is self-imposed. It is the characters of the president of the appeal court and the chief justice, which dictate the extent to which the executive branch pokes its nose or does not in the functioning of the judiciary.

Justice Kananelo Mosito leads the Court of Appeal as its present. In the few years he has been on the helm of the court, he has demonstrated that he is a man of stature, an independent personality that is not easily swayed to go right or left in performance of his judicial duties. Integrity is a function of consistency in doing the right thing and refusing to be drawn to the wrong thing. Justice Mosito has been consistent in the verdicts he has passed, some of which involved the ruling party (for which it is suspected he supports) and the then prime minister. He has survived many rigours as head of the appeal court, experiencing attempted removals, suspensions and a litany of actions that sought to derail him from performing his duties. He did not relent in his fight for justice for all, irrespective of who is involved.

On the other hand, Justice Sakoane has been resilient in his impartial delivery of justice, sailing against the wind when expectations were otherwise. His outspoken nature, espcially on wrongdoing and castigation of any acts that undermine ethical behaviour and practice have placed him in that high office. He has presided over serious cases that involved the very senior people in this country and allowed himself to be guided by the spirit of the law, not partisan politics. He has stood firm on several occasions and this has placed him top on the judicial bench, though he is still new in the judicial circles.

As a result, the nation is looking forward to the two most senior judicial offers to lead the nation towards good governance practice with a judicial sector that is insulated from undue political interference and infiltration by the executive branch. Concentration must be to bring about public confidence in the functioning and operation of the judicial sector in Lesotho. The two most senior judicial offers have a mammoth task of restoring the dignity of the judicial sector, which had been recently gnawed away by obvious partisan interests by some in the judicial bench. They should work hard to inject public confidence in the judicial sector, which has lost its moral compass with allegations of rampant corruption, high levels of inefficiency triggered by private lawyers, ineffectiveness as a result of budgetary constraints, possibly made possible by the executive branch and also the notorious and historical backlog of cases.
Lesotho is a highly litigious society, which demands a judicial sector that is efficient, effective, proactive, impartial and functional. Basotho trust that personal, family, religious and political woes would rather be settled by courts of law, instead of doing that themselves. Basotho naturally lack the trouble-shooting mechanisms to solve conflicts amicably without seeking recourse to the third party. That is why courts of law are inundated with  cases to settle disputes of issues that could have best been dealt with at family, interpersonal (person-to-person, neighbour-to-neighbour), internally among political players and within political parties that have legitimate structures. Some disputes are those among leaders and members of religious groups as well as organisations and companies. These bodies fail to go to the drawing board when disputes arise, but instead, resort to the third party if violence is not a choice. There is tendency to not optimise internal remedies, but to resort to the external force to solve a problem.

At the national level, this character of Basotho, which is not popular, is obvious where political parties would rather seek external intervention to solve a purely domestic issue. SADC and AU are often inundated with Lesotho's disputes and conflicts that they have to solve, when the country has formidable leadership elected to solve problems of their people. Bu instead, they shift the responsibility to a regional and continental body to do so. This is a signal of poor leadership, which is naturally thrust in the ability to solve problems of any kind. Therefore, given the litigious nature of Basotho, the two senior officers, Justices Mosito and Sakoane have a mammoth responsibility on their shoulders, that of revamping the transforming the judicial sector of Lesotho; and they are called on not to disappoint.