Governments' lifespan cut short by snap polls, a bubble that will explode 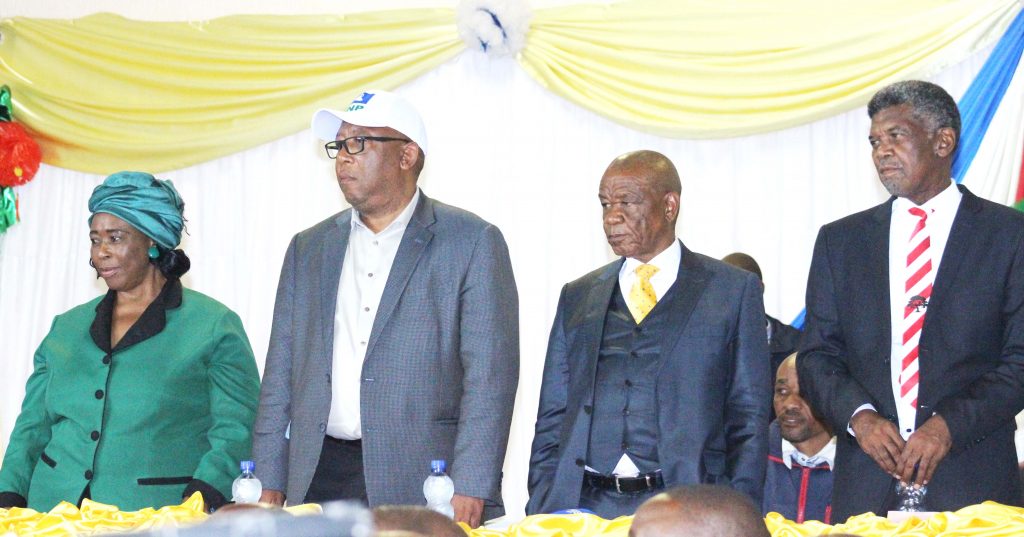 MASERU: Democrats, political pundits and status quo lovers would invariably see nothing sinister with a trend of cutting short the lifespan of a sitting government through snap polls. This political anomaly started in 2014 when 'unsolvable conflict' erupted among governing partners. It got repeated in 2017 with one of the then ruling coalition partners experienced intraparty conflict, which led to a split. Both political shenanigans brought down elected governments in succession. One was in the 2012-2014 regime after the first coalition government which was ushered in 2012 collapsed and another in the 2015-2017 coalition government, which was collapsed in 2017. These two regime fell when they had hardly been in power for two years. Political pundits predict yet another spell, if the 'seemingly unfathomable conflict' within the main 4x4 coalition partner, All Basotho Convention (ABC) does not get solved. thiskingdom.com takes a snapshot of trends in the political landscape of Lesotho since the advent of coalition governments were ushered in by the 2012 national poll..

The agitation and excitement that has currently characterized Lesotho's political landscape since a fracas began within the ABC heralds some development - either negative or positive in the politics of Lesotho. Some pundits predict a major split within the 13-year-old ABC, whose growth has been phenomenal among all political parties in Lesotho since its inception in 2006. Opportunistic political players have already put out their knives and forks in anticipation of a snap election within a year or so.  This anticipation can turn out to be true only if the disgruntled faction of the ABC successfully passes a motion of no-confidence in the Prime Minister, Thomas Thabane. Signals are pointing towards that direction, as there are two motions that have been tabled already in the National Assembly. One is seeking to propose a secret ballot when a motion of no-confidence is passed against a sitting prime minister. This is intended to protect Members of Parliament (MPs) of a party whose leader is a subject of the no-confidence vote from suffering any reprisals for voting with the opposition or proposing a motion against their own prime minister. This motion is seen as targeting Thabane.

The Second motion before the Speaker of National Assembly and his deputy is the one proposing an amendment to the Constitution of the land to deprive a sitting Prime Minister a privilege to advice the King to dissolve parliament and call for elections after losing a vote of no-confidence in Parliament. Section 83 (4) of the constitution states thus: "if the National Assembly passes a resolution of no confidence in the Government of Lesotho and the Prime Minister does not within three days thereafter either resign or advice dissolution, the King may, with the advice of the Council of State, dissolve parliament." The two motions have a clear telling to vigilant and opportunistic politicians that something is fishy here, there is a poll by the corner. One leader used to say "ho nkha likhetho mona," there is a smell of elections here (literarily translated to mean that the country might go for polls anytime soon), given circumstances within the political ring at that time. This is seen to be the case, given current political developments, particularly the internal shenanigans that have since bedeviled the ABC since it came out of an elective conference in February 2019. This conference was preceded by emotions, which had flared high, triggered by the zeal to seize the second most influential position within the party, the deputy leadership of the ABC.

Some pundits have also said that the current quagmire within the ABC, which has been aggravated by the recent court ruling by the Acting Chief Justice, 'Maseforo Mahase, has poured salt on open wounds within the visibly divided ABC. The ruling, which has sent tongues-wagging within the ABC and the general political spectrum, nullifies the February 2019 conference that elected Professor Nqosa Mahao as Deputy Leader of the ABC and other seemingly unwanted members of the new committee.

Pundits argue that before this ruling that has spurred tensions across the large spectrum of the political edifice of Lesotho, there was a sign of peace-pipe smoking between Thabane and Mahao. This was hopefully to put the conflict that has largely torn the ABC into two main factions (labelled as 'likatana' and another, 'state house') behind and move on. There was an instance when Thabane's remarks in his weekly rallies seemed to demonstrate a leadership flare by this second most senior citizen of the country. He seemed in dire need to defend the unity of the party by calling his archrival (Mahao) to state house and discuss direction towards mending obvious cracks within the ruling party. It was just a short while when the ACJ's ruling poured petrol on blazing flames, spoiled the broth and turned down the whole scenario into a fracas that has clearly set aside the two warring sides within the party.

With this ruling, which has given the Thabane-led faction a stimulus towards purging their rivals, the Mahao faction has been left licking its wounds. However, it has remained resolute to fight the ruling to the bitter end and until their last drop of blood. The irate Mahao side, which has launched its broadside against the ruling, is intent to challenge it. This has undoubtedly widened the cracks to an extent that there is a threat of a no-confidence vote once parliament reopens this Friday after an indefinite closure. On the other hand, developments within the ABC have also spurred excitement within the opposition bloc, which has in isolated incidences shown sympathy to the disgruntled Mahao faction. This is seen not as sympathy per se, but an opportunistic gimmick to gain advantage of the split, should this lead to toppling Thomas Thabane, who has been a target for a long time. The bottom line is that the trend of no-confidence vote, which cuts short the lifespan of a sitting government, triggered by internal wrangling within one of the coalition partners has had ripple effects for the continuance of government to complete its five-year lifespan.

2017 snap poll resulted from internal wrangling within the DC

In the last spell of a government brought to its knees by a squabble within the main partner in the coalition government was that of the 2015-2017 regime. The then main partner of the seven-party coalition (one of the largest coalition governments ever seen in Lesotho), the Democratic Congress (DC) got torn apart and a new party, Alliance of Democrats being born. All hell had broken loose within the DC when its then Deputy Leader, Monyane Moleleki broke ranks with his erstwhile ally and master, Pakalitha Mosisili. A bone of contention had been caused by (it was rumoured) Moleleki's jealousy when he saw his archrival and then newcomer into the leadership politics of Lesotho, Mothetjoa Metsing enjoy unfettered access and manipulation of Mosisili in the government. This pushed Moleleki to the margins. According to the 2015 poll outcome, DC got 47 seats and was followed by ABC with 46 seats. However, due to developments then in the political arena, ABC and DC could not form an alliance that would help them cobble a coalition form a government. This was against the backdrop that the two main parties then stood a grand chance to form a formidable and undisputed government as they together had 93 seats. This could give them a comfortable two-thirds majority in parliament and they could rule with no stress if the spell of splitting did not beset them. However, dynamics in the political landscape could not allow a marriage between ABC and DC though courtship had largely taken place. After a lot of courtship for the pursuit to form a government, DC, Lesotho Congress for Democracy (LCD), Lesotho People's Congress (LPC), Popular Front for Democracy (PFD), Marematlou Freedom Party (MFP), National Independence Party (NIP) and Basutoland Congress Party (BCP) cobbled one of the biggest coalitions ever formed in Lesotho, the Khokanyana' Phiri.

Moleleki, seeing his chances of becoming the second-in-command in government as it was the case in the DC impractical, grew goose pimples. His hopes were shuttered by rules of the game in that a leader of the nearest political party in the number of seats within the fathomable alliance (drawn from the election results), deputises the prime minister of a majority party. That second-in-command was to be Mothetjoa Metsing. This was much to the dismay and disgust of Moleleki who felt hit below the belt by Mosisili. Metsing found solace and entrenched himself closer to Mosisili in an opportunistic manner to take over the reins, should anything happen. This turn of events compounded Moleleki's disgust and he started shenanigans within the party. Utimately, that spilled into government as his relations with Mosisili became sour by the day. He jumped ship to form the AD. As it is a norm that a leader purges those he views as opponents in his party from their cabinet positions, Mosisili kicked out a good lot of Moleleki-suspected allies in the DC-led government and this gave the split momentum.

Without any shred of doubt, Parliament becomes a victim when political scene gets dirtied by politicians unfazed by the national developent agenda, but seek to serve their own narrow interests. Seemingly, matters did not go well in the DC, which is the majority ruling party coalition partnerr. The newly-formed AD joined forces with ABC, Basotho National Party (BNP) and the Reformed Congress of Lesotho (RCL) to topple the Mosisili-led coalition government. Leaders of the three parties, Thomas Thabane, Thesele Maseribane and Kekeletso Rantso respectivel, had been holed somewhere in South Africa after a self-imposed exile after the 2015 poll. The trio had failed to cobble a fruitful coalition to form a government after the 2015 poll and resorted to create a scarecrow in front of SADC that there was no stability in Lesotho. That was followed by their fleeing the country to seek political asylem in the neighbouring country. Moleleki, now emboldened by his new AD, which was seemingly drawing masses, facilitated the return of Thabane, Maseribane and Rantso. He led a no-confidence vote on Mosisili's government and toppled his hardly two-year regime. Using the Section 83 (4) alluded to earlier, Mosisili categorically refused to resign, which is option one under the mentioned Section. Instead,he resorted to option two, which is to advice the King to dissolve Parliament and call for polls.

The episode of 2017 when the hardly two-year old regime crawled on its knees until it fell had been preceded by a similar incident in 2014, though in a different fashion. Though the trend of toppling sitting governments through a no-confidence vote has been seamless, it has however manifested itself in different fashions. However, these all had a similar effect of toppling a government by a no-confidence vote, followed by a call for a snap poll. In the 2012-2014 coalition, a second-in-majority partner in the coalition, the LCD instigated fall of that government when its leader, Metsing stubbornly stood firm against the non-challengeable Thabane. The LCD members had accused Thabane of taking unilateral major decisions in government without informing his Deputy, Metsing. The tension grew in momentum until it was unfathomable and was compounded by Maseribane joining forces with Thabane against Metsing to sideline the latter. The whole quagmire reached its climax when Thabane expelled then Commander of the Lesotho Defense Force (LDF), Lieutenant-General Tlali Kamoli and appointed the late Lieutenant-General Maaparankoe Mahao. All hell broke loose and led to Thabane skipping the country to be holed up somewhere in South Africa. This triggered intervention of SADC and ultimately a call for elections.