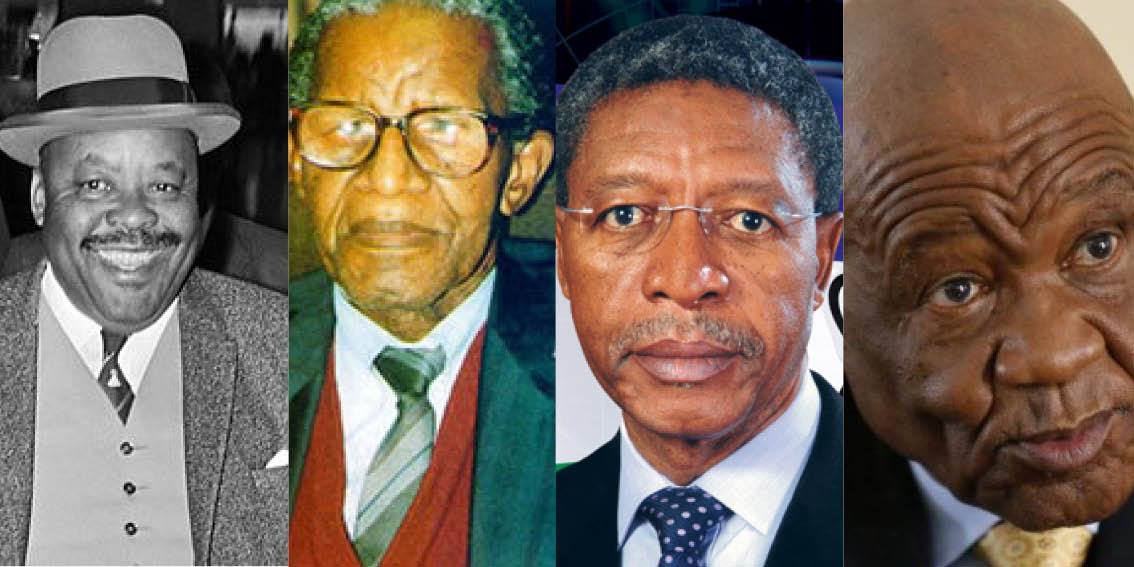 From Jonathan, Mokhehle, Mosisili to Thabane, Lesotho's politics has suffered a blow under the cults of personalities

Maseru: From independence, Lesotho's political scene has been largely polarized by two major cults of personalities, Leabua Jonathan who represented the nationalists and Ntsu Mokhehle who came from the congress side. The nationalist ideology holds that a nation is the fundamental unit for human social life, and takes precedence over any other social and political principles. Nationalists are guided by the political doctrine of collective action by political and social movements on behalf of specific sections of the nation. The nationalist leaning is that each nation should govern itself, free from outside interference and that a nation is a natural and ideal basis for a polity. Nationalists in Lesotho have long been viewed in the light of elites as they tended to be dominated by the chieftain lineage of Bakuena, who are royalists in this country. Royalists assume political authority by virtue of their birth right. The association of nationalists with royalists has historically placed the Basotho National Party (BNP) as an elite group that lacked grassroots orientation. At the same time, the congress side was largely viewed or presented itself as a vanguard for the masses, the subjects and those pushed to the margins of society by the 'elitist royalists.' The latter group had a deep-seated hatred for the chieftaincy as Mokhehle of the Basutoland Congress Party (BCP), preached a gospel that chiefs were parasites who had no concern for the masses. thiskingdom.com analyses the role played by personality cults in destroying Lesotho's politics..

In countries where there are personality cults, development is politically-stunted because these cults tend to create an impression that there is no other leader other than themselves. This also creates a society where the line of thinking is that of one person to the detriment of a majority of talented and gifted individuals. Countries like Libya, Zimbabwe, then Zambia, Swaziland, Angola, then Zaire, Uganda and Equatorial Guinea had cults of personalities. These countries are found in Africa. Others are Palestine, Cuba, Venezuela and Iraq. Their leaders like King Mswati III, Mobutu Sese Seko, Robert Mugabe, Kenneth Kaunda and Fidel Castro as well as Yasser Arafat, who killed political activity as they dominated the political landscape of their countries. The monopoly over politics and the hegemonic state they create under their leadership turn the countries into zombies which have only one leader, the personality cult. In Swaziland, there is no hope for any other leader except for King Mswati's eldest son, who might take over after his father' death. Monarchs are succeeded when they are dead or unable to perform their official duties and they are not elected.
In Zambia, Kaunda became the sole leader in that country for 27 years to the detriment of hopefuls who connived to topple him through the ballot. He had created a hegemonic state where citizens saw no potential successor, but only him. The same can be said about Robert Mugabe, who, after close to four decades, had created a hegemonic state that had no one except himself. He also manufactured internal power-wrangling within the ZANU-PF, where aspiring candidates' wish was only that he dies so that they take over. He was removed unceremoniously by 'a coup which was never a coup.'

In Lesotho, Leabua Jonathan, Ntsu Mokhehle, Pakalitha Mosisili and Thomas Thabane have dominated Lesotho's politics for all wrong reasons. They have created an impression that Lesotho or their political formations are at the mercy of their special leadership, which cannot be found anywhere else. Like in other countries, personality cults are charismatic and influential. But they end up being dictatorial and reckless in their application of power vested in them by the masses. They shove down their views and thoughts on the throats of those they lead. They do not tolerate dissent and rule by the iron fist. They plunder resources and create an unnecessary scare-crow. That is the reason their fall becomes graceless because by the time they fall, they would have created many enemies within their own political formations and the country at large. Even their good leadership skills, where there are any, get muddied by their long stay in power. They create internal competition and factionalism becomes order of day in the political formations they lead as everyone naturally wants to taste leadership, especially where career in politics is involved. For fear of any reprisals from the dominant master, aspirant candidates within their formations create their own war-zones and factional groups, but which fail to surface.

Jonathan was a charismatic leader who was on the helm of the BNP and the country for more than 15 years, having ascended to power under controversial circumstances following the 1970 state of emergency that was followed by known political episodes. He became a darling of Basotho as his developmental plans delivered the goods for the nation. At the same time, he became a polarising figure that had no mercy for the opposition side. He surrounded himself with yes men and women and did not tolerate any dissent, within and outside his BNP. He even had a bone to crush with the monarchy as it was equally becoming a powerful force to be reckoned with by Basotho. Like other personality cults that do not tolerate competition for power or any challenge to their fortress, he came down harshly on the monarchy, sending the King Moshoeshoe II to exile. His fall from grace was graceless and he died like a pauper.

Mokhehle positioned himself as a man of the masses and a vanguard for the voiceless, having amassed a lot of power among the grassroots. He took a vantage point as an opponent of the ruling elite of Jonathan, so the masses aligned with him. He became charismatic and spoke the language of the man on the street. However, he did not stay long in power due to ill health and old age. But he has been a key figure in the destruction of Lesotho's nascent politics. Unlike his archrival, Jonathan, there is little to show in terms of development of Lesotho, economically and otherwise. Jonathan has a good track of record in terms of development, but Mokhehle does not have, apart from allowing divisions, not only within his own party, but nationally. There was belief that no one could lead the BCP other than him. When the jostling for power to hold the reigns of the BCP grew in momentum after taking reins of power at national level, he skipped the boat and formed the Lesotho Congress for Democracy (LCD), for which he led for a short stint, but was honoured as its life president. He still had sway over the politics of the country even after retiring.

Mosisili's rise to power has been suspicious and not expected as he had been hand-picked by Mokhehle over the obvious and aspirant successor, Molapo Qhobela, wno was then the deputy leader of BCP. Like it is a challenge everywhere, personality cults fear internal challenge and destroy those who might be their equals in terms of charisma. They tend to hand-pick their successors so that they are not followed in the nasty deeds they engaged in while in power. Mosisili is a political protege of Mokhehle and present himself as a custodian of congress politics. Mosisili gradually entrenched himself in the politics of Lesotho, post-Mokhehle and became a formidable force among congressmen and women. His amass of political power became a double-edged sword, which positioned him as a personality cult while at the same time leading to his gradual demise in the politics of Lesotho. The challenge is that like other cults of personalities everywhere else, he became obsessed with power and stayed on too long until aspiring candidates lost patience and plotted his ouster. The defection of Monyane Moleleki, an obvious successor to Mosisili in the DC was orchestrated by Mosisili's long stay on the helm of the DC.

The DC deputy leader became disgruntled when he realized his hopes to clinch leadership of the party and ultimately of government were shuttered. He became impatient when he saw no signal his master was prepared in anyway to relinquish power to him, and age was now working against the politically-active Moleleki. His last straw was when he missed a grand opportunity to deputise Mosisili in the government, post the 2015 snap elections, an opportunity that went to his rival, Mothetjoa Metsing. Moleleki admitted to have been impatient with his master when he saw no movement after being promised that he would take over after the 2012 national elections. This was the time for a hype to lead one of the political parties he had worked hard to form after a bruising battle for the control of the LCD with a faction led by Metsing. But his efforts to lead the DC had all been in vain as the leader did not show any sign he would pass on the baton until he decided to jump ship to form his own thing. Yes, the outgoing DC leader could claim having groomed a successor, who is Mathibeli Mokhothu. What about Monyane Moleleki who was a stalwart for the party since its formation? Even if he has a good political clout and experience than Mokhothu, no, Moleleki was not groomed to take over the reins of the DC.

The ABC does not have a succession plan beyond its leader, Thomas Thabane. It is susceptible to fall into the same trap its rival, DC has had, of a successor who came just from nowhere. But the difference might be that in the ABC, a new leader after Thabane might not be the making of the current leader to the dissatisfaction of some members of the party. Though Thabane is charismatic and has sway over the party, he has no influence over who gets elected, this has been proven by the Mahao scenario. Though he had his own leanings, likes and dislikes of who might be his successor should he step down, that was not to be the darling of the masses, Moeketsi Majoro.  This is what obfuscates the whole notion of 'grooming a successor.'

The argument that Moeketsi Majoro of the All Basotho Convention (ABC) might have been silently groomed by Thabane is not correct as his name surfaced when there was a need to hold an elective conference. After the demise of Tlali Khasu, there was no clear successor, except that Maliehe was parachuted to warm the deputy leader seat, becoming a prince that never became a King.  But Thabane still remains a cult of personality within the politics of Lesotho and of his own party. This is to the detriment of his party and that of the country. Leaders often dismiss the notion of grooming a leader premised on the notion that they cannot arrogate unto themselves the duty to choose a successor for their parties. sounding rational though, they argue that they have no power to dictate successors on behalf of their parties' membership. This is a scapegoat they use when they want to cling to power, predicated on the reasoning that as long as their followers want them to stay in power, they will do so until the membership feels it is time they have to go.